Augmented and Virtual Reality for construction

We are aware of the countless times we have heard about the low digitalization of the construction sector; and the truth is that, the more we hear it, the more we will be assuming the transformation that is imperiously needed in this sector.

The integration of new technologies in the work processes in the site execution phase can be considered a challenge, especially in a sector such as construction, which is characterized by challenging projects in complexity with the intervention of multiple agents; but new technologies such as BIM, together with Virtual and Augmented Reality, have arrived to break down barriers and transform the sector to help us become more efficient, save costs and increase productivity.

At VT-Lab we work to contribute to the digitalization of the AEC sector in general, and the construction sector in particular, so all of our developments are based on technological productivity solutions, which aim to improve efficiency in workflows and work process in any phase of the life cycle of an AEC asset.

For this reason, as many of you know, we have developed VT-Platform, the first web platform that allows you to visualize, interact and work with BIM models in Virtual Reality and Augmented Reality in a simple, intuitive way, and from anywhere.

Our solutions can be applied, as we have mentioned, in any phase of the life cycle of an AEC project, but what are the possibilities that the application of Virtual and Augmented Reality offers for the execution phase? 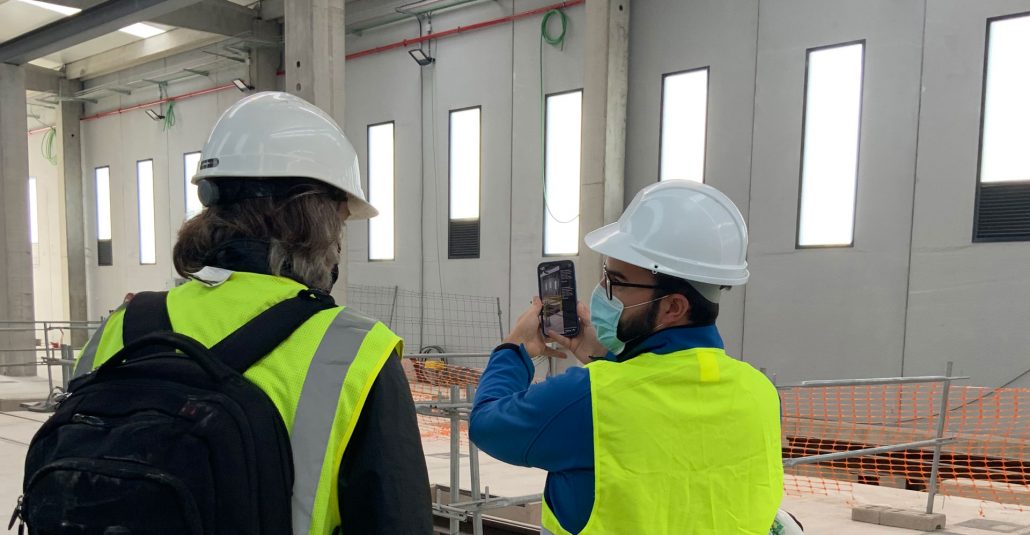 Augmented and Virtual Reality for the site execution phase

Virtual Reality (VR) is a technology that immerses the user in a completely digital environment, generated by VR devices such as the Oculus Quest glasses developed by Meta (The once Facebook).

The application of this technology in the execution phase makes it possible to manage BIM models in a much more agile and understandable way for all the agents involved. How?

Imagine immersing yourself in your BIM model at 1:1 scale. This makes it possible, for example, to detect interferences visually and report them directly on the model. These notifications are immediately updated in VT-Platform, making it possible for site workers to access them in Augmented Reality.

Augmented Reality (AR) is a technology that consists of the superposition of digital elements on the real environment through devices such as smartphones, tablets or Augmented Reality glasses.

By the superposition of the BIM model on the real space, AR provides a more accurate view of what is going to be built, eliminating the incorrect interpretations that can result from working only with 2D plans.

The application of this technology in the execution phase makes it possible to manage the BIM model directly on site, superimposing it on reality in the exact space in which it is to be located, making it easier, for example, to detect interferences visually, and annotating them in situ on the specific element of the BIM model. 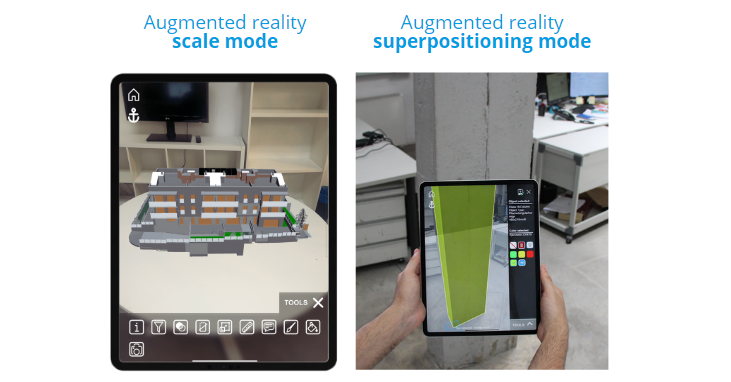 DIGITAL DATA FLOW:  extracting all the potential of BIM models on site with VT-Platform

What is the goal of all this? That the application of technology helps to carry out processes and workflows in a more efficient way. With this objective in mind, we have developed VT-Platform, a web platform that allows you to work with BIM models in Augmented Reality, Virtual Reality and from the web, through our digital productivity tools: annotations, information consultation, change of scale, change of color…

The main characteristic of VT-Platform is what we call Digital Data Flow (DDF): the synchronization of data between the three interfaces.

The DDF is based on the synchronization and saving in the cloud of the data generated when working on a BIM model in real time.

This allows, for example 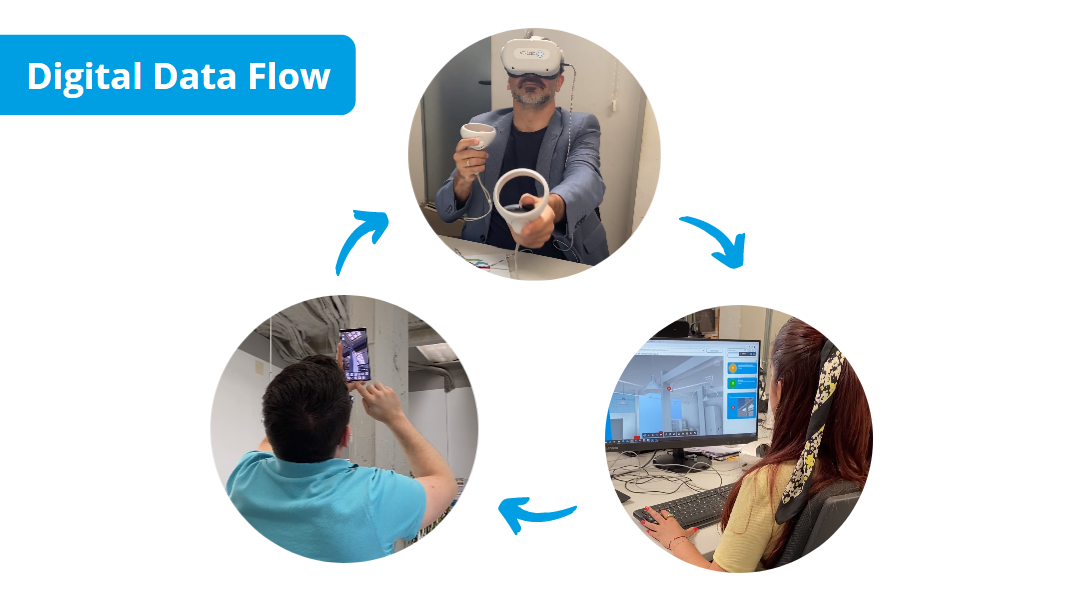 Advantages of using VR and AR

Now that we know some of the possibilities offered by the implementation of Augmented Reality and Virtual Reality in the execution phase, we summarize the advantages; but first, it is important to point out that the workflow to be carried out with VT-Platform will depend on the specific needs of each company. It is necessary to previously identify the need to be solved and the objective to be reached through the integration of BIM models in Virtual and Augmented Reality.

– Field access to the model information when it is necessary and at the right time and in the right context.

– Superposition of the BIM model on the site with a simple mobile phone or tablet.

– Visual identification of the exact place where to resolve an incident or carry out a specific cut.

– Instant updating of the state of execution of pending rework from the site, with respect to the 3D model.

– Detection and solution of interferences or problems in complex areas visually or interactively.

– Workers are kept informed of protocols or warnings visually and instantly.

Here, we show you more use cases based on the use of Virtual and Augmented Reality during the execution phase.